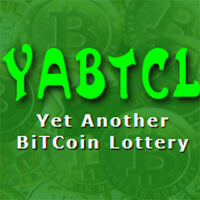 YABTCL’s website may not be aesthetically competitive, but the lottery game itself should be satisfyingly excellent. The platform is also informative with announcements of winning numbers and brief yet clear details of how to play Bitcoin lottery in their website. With this, it can somehow be implied that YABTCL does not focus on visuals and graphics, but on the quality and the fairness of the game itself.

One of the great things about using bitcoins is anonymity and YABTCL gives exactly that. In addition, the website also enables the players to either play with or without making any registrations.

Lottery draws at YABTCL happen three times every week: Tuesdays, Thursdays, and Saturdays at 24:00 UTC. In a total of 67 numbers, six numbers will be drawn. The price for every ticket starts at 0.001 BTC. Tickets can be bought between 6-16 numbers and with every ticket, you can win by hitting 2-6 numbers.

Moreover, there are two kinds of pools made by the users themselves: Share-a-Ticket and Add-a-Ticket. In the former, the ticket holder purchases the tickets and defines how many quotas the total value of the tickets will be divided. The owner can also select a service charge for this kind of pool. The latter, on the other hand, works when the owner defines how many tickets can be added to it and how many numbers each ticket can have. Joining pools increases the chance to win the lottery big time.

This is particularly suitable for new players who want to test the waters first before making an actual bet. Of course, this is also great even to those long-time players who just want to play for fun. Regardless of the reasons, it is incredible that YABTCL has something like this to offer to their players.

Another strong asset YABTCL has is their competitive affiliate program. Their multi-level affiliate scheme is just reasonably engaging as a way to earn more. With YABTCL, you’re not just a mere player, you also become an investor with great chances of earning a lot. First level affiliate gets you 10% of the house profit, second level gets you 8%, and the third level gets you 7%.

Depositing funds for non-registered members requires six confirmations while withdrawing funds should meet the minimum amount of 0.00005430 BTC. If you’re withdrawing to an address that is not registered in your account, you will be required to sign a message with one of your main addresses to confirm that you made the withdrawal request, which is fair for security purposes.